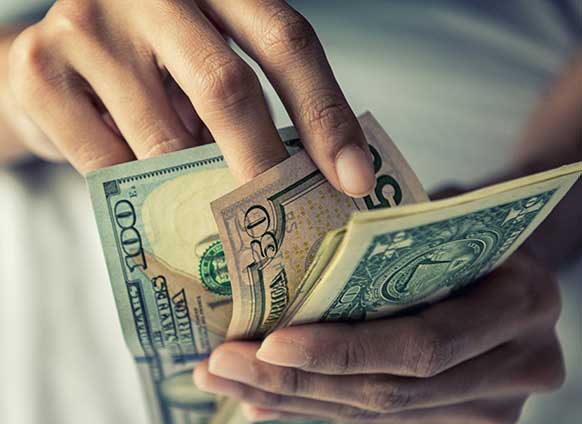 Do you ever get the feeling that no matter how hard you try, you never have enough money? Or are you doing ok financially, but wonder constantly, when the other shoe will drop and you will lose everything you have? How we relate to money is largely dependent on the mind-set of our parents. As children, we can’t really wrap our minds around the concept of money, so we observe and learn from what our mothers and fathers model to us. Whether you saw your parents fighting about the bills or  heard them saying “money doesn’t grow on trees,” “money is the root of all evil,” or “it is selfish to want a lot of money,” chances are that your subconscious mind adopted their limiting beliefs and with that their perspectives and behaviors around earning, spending and saving.

When I was thirteen years old, I spent a few days with my dad hiking in the Austrian Alps. During one of our walks, my father shared with me for the first time, how hard his own upbringing had been. When he was just six years old his father had suddenly passed away and his mother had to raise him and his three sisters on her own. They lived on a small farm, which provided them with the bare minimum.

But when World War II broke out their lives became much more difficult. He recalled, “In a short amount of time, we pretty much lost everything we had. My sisters, who were in their late teens, had to go from farm to farm, sometimes 60 miles away from our home, to beg for some potatoes, flour or milk. Not knowing whether she would be able to feed her kids was a daily concern and grief for your grandmother.” I had, of course, a thousand questions; but when I noticed how talking about his past had made my father appear more vulnerable, and in some ways, smaller than I had ever seen him before, I continued to walk with him in silence. After a couple of minutes, which appeared like an hour, he continued, “You see, when you grow up with so little, and for years lie in your bed night after night, wide-awake, because you are too hungry to fall asleep, you don’t take anything for granted anymore. I know as physicians your mom and I make a decent amount of money, but I also know that it can all disappear overnight.”

This hike with my dad made me understand why he was so often angry and frustrated when an unexpected expense occurred, or my parents’ practice had a little dip. It was the fear of lack, which was rooted in his difficult childhood, that overshadowed so much of his life. No matter how hard he worked and how much he earned, he never felt fully secure and abundant.

How did my dad’s money-mindset imprint on me? For the first thirty years of my life, it made me an avoider – I pretended that didn’t really care about money. While I wasn’t in complete denial (otherwise I could have racked up a lot of debt), I didn’t want to waste my time thinking and worrying about my finances like I had seen my dad all throughout my childhood. However, once I met my wife, Danielle, I was able to embrace a much more empowering and positive perspective on money. For Danielle, money was a normal part of life that needed to be respected, appreciated and attended to, just like our physical health, our animals, our living environment and our relationships. From her, I learned that when we take stewardship of our life and approach each of its aspects with a sound mixture of commitment, curiosity and creativity, any negative associations and patterns of the past become neutralized.

Yet, to shift out of scarcity consciousness, powerlessness, avoidance and frustration around money, we need to also let go of the limiting beliefs we have adopted a long time ago. I invite you to listen to my episode of Empowerment Radio, where I continue to discuss the topic of “How you can erase limiting beliefs and reprogram your money-mindset.” The good news is, beliefs are usually neither right nor wrong – they are just opinions, which tend to distort our perspective on whatever topic they are focusing on. So once we notice that a belief no longer serves us, we can erase and replace it – especially when we are working consciously with our subconscious mind.

To your success and happiness,